This patient was wearing a removable partial denture to replace her upper right lateral incisor. She was unhappy with both the concept of a removable bridge as well as the esthetics. The denture tooth was too white and too long. She also did not want her natural teeth prepared for crowns, and did not have the finances for implants. I chose to place an adhesive all ceramic bridge in the situation. The bridge was two parts, the first part, or substructure was a composite resin/fiberglass material which was bonded with composite resin materials to the adjacent teeth from the back. Then a porcelain laminate was bonded to the front over the substructure to complete the esthetic result. This type of bridge, while not as strong as a porcelain fused to metal bridge, provides beautiful esthetics and conservative preparation, without the problems of metal graying of conventional "Maryland Bridges".

As my Office Manager says, "Oy-vey...what a mess!" If you can believe it, this man was seen regularly by a periodontist and orthodontist for over twenty years and was never guided to a dentist. He saw me only after he was unhappy with another dentist's temporary bridge on the upper right side. After four months of treatment, we rebuilt his back teeth with porcelain fused to metal crowns and bridges and bonded his front teeth to replace the missing tooth structure. Notice on the lower front, we placed pink colored porcelain to create an illusion of normal sized teeth where the bone and overlying gums were gone due to traumatic extraction years earlier. We could have alternatively regrown both the bone and gums using surgical techniques, but this patient was not interested in this type of surgery.

This patient was not very happy with her previous dentist either. The bridge on her upper right was only six months old and the tooth which looks backward (left lateral incisor) was going to be extracted. Look how unhealthy the gums appeared above the recent bridge and notice how uneven the gumline was from left to right...I won't mention to bad bonding. After extracting the failing lateral incisor, doing periodontal surgery to correct boney and gingival problems and placing two three tooth bridges, she was happy and healthy!

This patient had seen another dentist previously. This dentist had palced a temporary bridge covering all of her remaining teeth. She had also seen a periodontist for treatment of periodontal disease and had two implants placed by the periodontist. In the first picture you can see the discoloration and poor shape of her tempories. She had postponed her treatment for a few years for various reasons and these temporaries were yellowed and cracked. We replaced them with new temporaries (provisionals) and subsequently completed the bridgework using porcelain fused to metal. We also grafted her gums in order to create a more normal gingival profile. 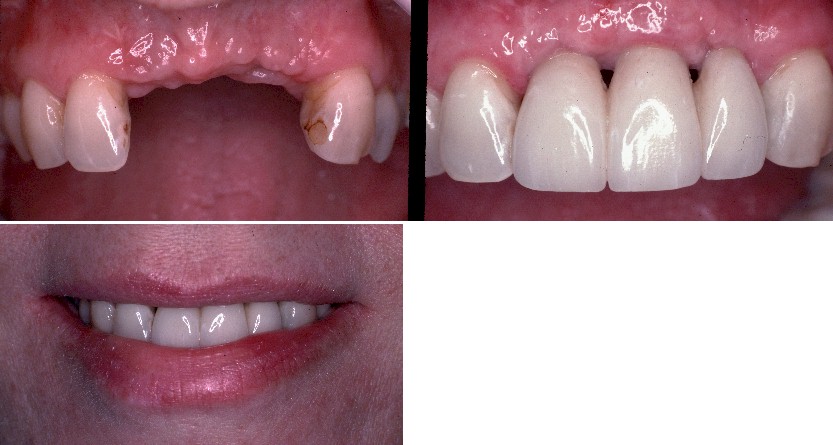 This patient was a nurse and had lost her three front teeth in a car accident. For years she had been wearing a removable partial denture, and was saving for eventual implants. Three implants were placed and subsequently restored with three crowns. Unfortunately we were unable to rebuild all of the lost gingiva (gums), but since her smile hid this problem, we considered her case an esthetic success. She was delighted to be able to bite into an apple again!

This patient had a root canal treated left lateral incisor which fractured down the length of the root. In the photograph on the right the fracture is evident. This tooth was extracted. An implant was planned in its place since the patient did not want the teeth on either side prepared for any type of bridge and a removable appliance was unacceptable to him.

In the photograph on the left you can see the post which is anchored to the implant and on the right you can see the final crown cemented onto the post. The gums still look red due to the recent surgeries. Over time the color of the gums will fade and look normal. The crown is a porcelain fused to metal crown. The patient was quite pleased with the outcome. 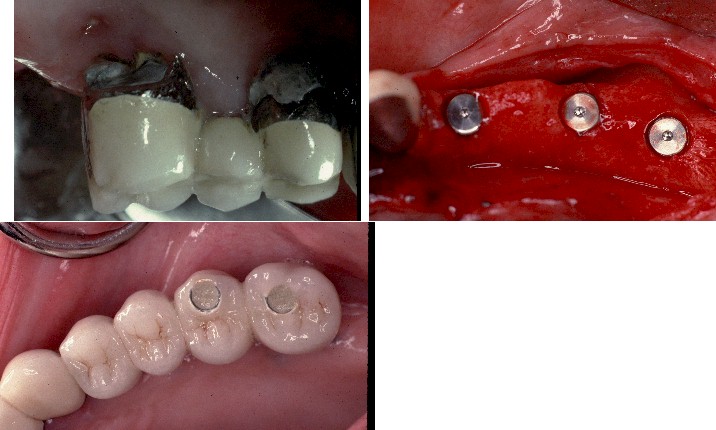 This patient had a previous bridge which got decay underneath the margin (see first picture). The teeth supporting the bridge needed to be extracted because they could no longer support a bridge. This patient did not want a removable denture. Three implants were placed in the bone after bone grafting procedures were completed by a local Oral Surgeon (second picture). After Six months, the implant were uncovered and a new bridge was inserted. This bridge was screwed into the implants so that it could be easily removed if necessary. The screw access holes can be seen filled with tooth colored composite resin in the final photograph.

This patient fell out of a tree as a child and lost both front teeth. They were both replaced, but the upper left incisor failed shortly thereafter. The left photograph shows the upper right central incisor prior to its removal due to severe infection. The right photograph shows the two implants after they were uncovered. Notice the severe bone/gum loss. An attempt had been made twice to regrow the bone and gums, but was unsuccessful.

These photographs show the temporary prosthesis in place. The gum replacement portion was screwed into the implants and the crowns were cemented overtop of the gum prosthesis. The final case in not yet completed, but I will add it to the web site when it is. The final color matches will be much better than the temporaries.

Teeth are lost for various reasons, cavities, periodontal disease, trauma, nerve infection to name the most common. In the past it was commonplace for teeth to be extracted (removed). As dental science has advanced, the ability to save teeth has become the norm. In most cases teeth which previously would have been lost can now be saved. The main reasons people still lose teeth today are 1) Lack of Knowledge, 2) Lack of Financial Ability, 3) Lack of Care, 4) Trauma or 5) Cracked Roots.

When teeth are lost a chain of events are put into place which without correction can lead to further loss of teeth and function. Other teeth can shift into the created spaces and chewing forces may shift to other teeth. This can subsequently cause the front teeth to flare out creating unwanted spaces. An altered bite can also cause the facial features to collapse. The more teeth that are lost and not replaced, the greater the odds that wrinkles and lines will form, causing premature aging.

Missing teeth can be replaced with either fixed (not removable) or removable replacements (prostheses). Non-removable or fixed prostheses are usually preferable since they are more similar in function and esthetics than removable prostheses. Fixed bridges have traditionally been made of porcelain fused to a gold alloy and they are still the "Gold Standard". Newer bridges are now available which are made of composite resins with fiberglass substructures, high strength ceramics and hybrid materials. Each of these materials has a time and place and if used selectively can have wonderful results. The main problem with non-metal fixed bridges has been their fracture resistance is poor compared to porcelain fused to metal.

Conventional fixed bridges require that teeth on either side of the missing tooth/teeth are prepared for crowns. The bridge is nothing more than multiple crowns connected together and cemented to the prepared teeth (called abutments). The replaced tooth is called the pontic. Another type of fixed bridge does not rely upon the abutments prepared for crowns for retention, but rather relies upon bonding materials for retention. These are called adhesive bridges or "Maryland Bridges" Originally Maryland bridges were porcelain fused to metal prostheses which were bonded to the backs of the adjacent teeth after minor tooth preparation was completed. While this type of bridge is still common, a non-metalic adhesive bridge has been developed call an "Encore Bridge", which is composed of a fiberglass/composite resin backing which is bonded to the adjacent teeth and a porcelain laminate which is then bonded to the front of the pontic tooth. There are also versions of this which are all processed composite, without the porcelain laminate. This technique has a high success rate in front teeth, but fails more easily in back teeth where the chewing forces increase dramatically.

What is an Implant? An implant is an artificial root replacement, usually made from a titanium alloy, which is surgically placed into the bone. During the healing phase, usually 4-6 months, the bone fuses to the implant. Once the implant is fused (osseointegrated), the implant is surgically exposed and a healing cap is placed. Once the gums have healed around this healing cap, a crown, bridge or other device for replacing a tooth/teeth is fabricated. Implant retained teeth can look, feel and function just like the original tooth/teeth they replace. Your doctor can advise you on the possibility of having implants in your situation.